Today is Vishu we celebrate it as our new year

Vishu (Malayalam:;Viṣu, Tulu:;Bisu) is a festival celebrated in the Indian state Kerala and;in coastal Kanyakumari nearby regions and their diaspora communities.The festival follows the solar cycle of the lunisolar as the first day of month called Medam

The festival is marked by family time, preparing colorful auspicious items and viewing these as the first thing on the Vishu day. In particular, Malayali seek to view the golden blossoms of the Indian laburnum (Kani Konna), money or silver items (Vishukkaineetam), and rice.;The day also attracts firework play by children,wearing new clothes (Puthukodi) and the eating a special meal called;sadhya, which is a mix of salty, sweet, sour and bitter items.

The Malayalam word "kani" literally means "that which is seen first", so "Vishukkani" means "that which is seen first on Vishu". The traditional belief is that one's future is a function of what one experiences, that the new year will be better if one views auspicious joyful things as the first thing on Vishu. Therefore, Malayali Hindu women spend the day before preparing a setting, usually a tray, of auspicious items. This setting is the first thing they see when they wake up on the Vishu day.

The Vishukkani setting consists of items such as rice, golden;lemon, golden;cucumber,;coconut;cut open, jack fruit, kanmashi;Kajal,;betel;leaves,;arecanut,;metal mirror(Vaalkannadi), golden yellow;Konna;flowers which;bloom in the season of Vishu, holy Hindu texts, coins or currency notes, oil lamp (nilavilakku), and an image of the Hindu god Vishnu.Mirror in Vishukani is a symbol of seeing yourself as a part of abundance you see in the form of Kani.

The tradition has been that one of the members of the house, typically the mom or elderly person lights up the lamps at dawn, then goes to each member of her family one by one, blindfolds and wakes each one up, walks them to the front of the setting. She then releases the blindfold so one can see the setting, and then greets the Vishu day. 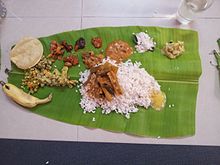 The;Sadhya;(feast) is a major part of all Kerala festivals. However, special dishes called Vishu;Kanji, Thoran and;Vishu katta;are more important on the new year day. The Kanji is made of rice, coconut milk and spices. Vishu katta is a delicacy prepared from freshly harvested rice powder and coconut milk served with jaggery.[10];For Thoran, the side dish, there are also mandatory ingredients. Other important Vishu delicacies include;Veppampoorasam;(a bitter preparation of;neem) and;Mampazhappulissery;(a sour;mango;soup)Even temple offerings called;bewu bella, include a mix of sweet jaggery, bitter neem, and other flavors.

The mixing of sweet, salty, sour, bitter and astringent flavors for the new year Vishu meal is similar to the;pacchadi;food prepared on new year day such as;Ugadi;by Hindus elsewhere in the peninsular regions of the;Indian subcontinent. These traditional festive recipes, that combine different flavors, are a symbolic reminder that one must expect all flavors of experiences in the coming new year, that no event or episode is wholly sweet or bitter, experiences are transitory and ephemeral, and to make the most from them

Wow...great info and learning about Vishu

Same to u RENUKA

Parenting Hacks: Here’s How You Can Help Protect Your B...

Wouldn't It Be Amazing To See What The Stars Have To Sa...

Chromosome And Genetic Testing During Pregnancy - Do Yo...

What The Stars Have To Say!

Little Things That A Mommy-to-Be Should Know: Eating He...