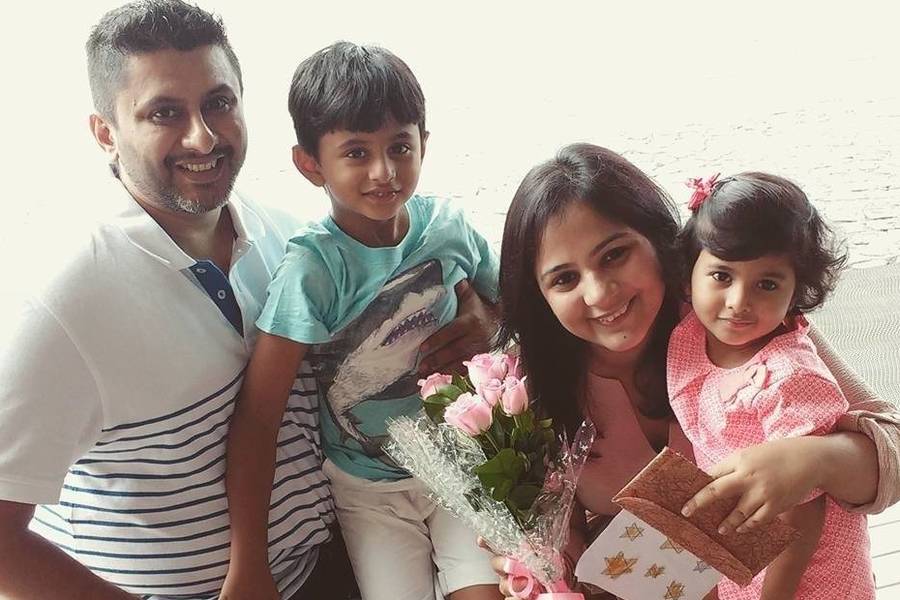 Life With A New Born Baby Who Had Eczema

Her first breath, took ours away. With the arrival of our daughter (my first born is a son), our family felt complete! The revelation that she suffered from Eczema crushed me. I was scared. More so, because I have a family history of atopic dermatitis that is three generations old!

My little girl was progressing fine, until one day (the 80th day of her birth to be precise); I saw a little rash on her cheeks. I initially dismissed it as a mild rash but gradually, it started spreading and inflamed to a level that it turned into little red wounds. Alarmed, I quickly sought an appointment with her pediatrician and subsequently with a pediatric dermatologist and my fears were confirmed.

Having gone through the condition myself and having seen my child suffer at its hands, I feel the need to educate young mothers about eczema.

Here is what I have learnt from this experience of dealing with this skin disease – Atopic Dermatitis.

1. What is Eczema or atopic dermatitis?

It is a skin rash that occurs before age 5. It is quite common among babies and sometime self-cures but in some cases, it doesn’t.
It’s inherited and usually appears when an infant is two – three months old.

2. What part of the body does it affect?

In my daughter’s case, it usually showed up on her cheeks, in her arm joints and on her chest.

After a child’s first year, it’s most likely to show up on the insides of the elbows, the backs of the knees, the wrists, and the ankles, but it can also appear elsewhere.

3. What are the typical symptoms?

Eczema can show up as red, crusty patches on your baby’s skin, often during her first few months. These can manifest more aggressively to various parts of the body. The end result: dry, itchy, red and cracked skin, which can sometimes ooze fluid and bleed.

My daughter’s skin had serious eruptions which were oozing pus. The itch made her face swell up and made her cranky and restless.

In my case, it was the genes. Some other potential  reasons could be – being allergic to detergents, bubble baths, shampoos, washing powders or fabric softeners. It was difficult to locate the trigger! We also tested her for lactose intolerance (my son had it). It was like looking for a needle in a haystack!

With the gravity of my daughter’s condition, I had to consult a doctor. As advised, I had to use steroids on her which is the last thing I wanted to give her! The medication would help some areas but doctors didn’t recommend using it often because of its high potency. Also, my doctor was very particular about weaning her off the steroid gradually by mixing it in a moisturizer so that she could be eventually relieved off them.

But no matter how much steroid I used, the rash re-erupted after a few weeks.

6. Educate myself about the triggers.

What the doctors said, wasn’t enough. So I decided to do some of my own research. I maintained my own log of observations. I worked on answering the following questions:

Gradually, I was armed with enough knowledge to know what was upsetting her skin. I noticed that her arm joints would get eczema during summer because of sweat, in monsoon due to humidity and in winters due to lack of it!  So basically, she had eczema throughout the year!

Furthermore, the wool, polyester and synthetic clothes were her worst enemies.

I was also asked to check for food allergies but much to my relief she didn’t show signs of it. She was primarily on breastfeed and that couldn’t be a trigger.

I got a list of things to do from the doctor and compiled it with my own, based on my observations.

No Oil Massage: This was a strict ‘No’ from the doctors end and I agreed. We didn’t want any friction against my daughter’s skin. Even during the bath, I only dabbed her and didn’t rub briskly.

Moisturize: Keeping her skin moisturised was crucial. I used specially prescribed moisturizers with a higher amount of emollin. There were a few hits and misses before we found what best suited my little one. I applied it twice and made sure one of the two times was immediately after her bath to lock in moisture.

Soap: The body wash that I used was actually a mild face cleanser that didn’t strip the moisture off her skin.  I absolutely avoid using regular commercial soaps, additives and scrubbers for her.

I made sure that anything that touched my daughter’s skin was cleansed, un-scented, dye-free and well sanitised.

I continued to give her a regular bath at night with warm water (hot water dried her skin more).

Cotton or organic fabrics were the way ahead for me. I cannot imagine any kind of artificial fibre touching her body. I also always dressed her in loose comfortable clothes that let her skin breath and made sure there is no abrasion against her already irritant skin.

Since my daughter was more prone to getting eczema around her mouth and on her cheeks, I started using a barrier so that the saliva or the food didn’t come in direct contact with the eczema. Ghee worked well most of the time. There was also an alternative ointment prescribed by the doctor.

I always made sure I kept her nails clipped so she couldn’t scratch her eruptions and bleed.

Put her on alternate healing methods.

I am a Reiki practitioner and a strong believer in homeopathy. These are the current healing methods that I am practicing on her. She still has phases of acute eruptions but the episodes have reduced.

Disclaimer : This is a first person account by a mother. Because everyone’s skin type is different you must consult a pediatric dermatologist at the earliest.